EUR/USD bulls take on the 78.6% Fibo ratio ahead of Powell

At 1.0548, the euro is higher vs. the US dollar by some 1.13% at the time of writing after rallying on broard risk-on from 1.0428 to a high of 1.0555. The euro has extended the rebound from a five-year low touched last week while the US dollar is down against its major trading partners.

The single currency benefited at the start of the week due to the European Central bank policymaker Francois Villeroy de Galhau who said a weak euro could threaten price stability in the currency bloc. On Tuesday, Dutch central bank chief Klaas Knot told the Dutch TV programme College Tour that the ECB should raise its key interest rate by 25 basis points in July but should not yet rule out a bigger increase,

"The first interest rate hike is now being priced in for the monetary policy meeting of 21 July, and that seems realistic to me," Knot said. He argues that a 50 bps rate hike should not be excluded if data in the next few months suggests that inflation is broadening and accumulating.

The euro has also benefitted from an improved risk sentiment in markets this week that has weighed on the US dollar. Hopes that China might ease two key sets of restrictions had set a positive mood. Additionally, Shanghai achieved the long-awaited milestone of three straight days with no new COVID-19 cases outside quarantine zones, which could lead to the beginning of lifting the city's harsh lockdown as soon as June 1.

Meanwhile, the US Dollar Currency Index (DXY), which tracks the greenback against six major currencies, was down 0.82% at 103.33, a touch away from the low of 103.226. The index hit a two-decade high last week supported by a hawkish Federal Reserve and worries over the global economic fallout from the Russia-Ukraine conflict.

However, the US dollar even remained subdued after data showed US Retail Sales increased solidly in April as consumers bought motor vehicles amid an improvement in supply and frequented restaurants, showing no signs of demand letting up despite high inflation.

Markets will now tune in for comments from Federal Reserve's Chairman Jerome Powell at 1800 GMT, who is being closely watched for any clues about whether near-term rate expectations could become even more aggressive. Fed speak comes on the heels of a strong Consumer Price Inflation report, which has cemented the urgency to move quickly to a more neutral policy stance.

The pair has rallied to test the bearish commitments around a 61.8% / 78.6% ratios. A daily close above the 61.8% ratio could be positive for euro's outlook for the near term. 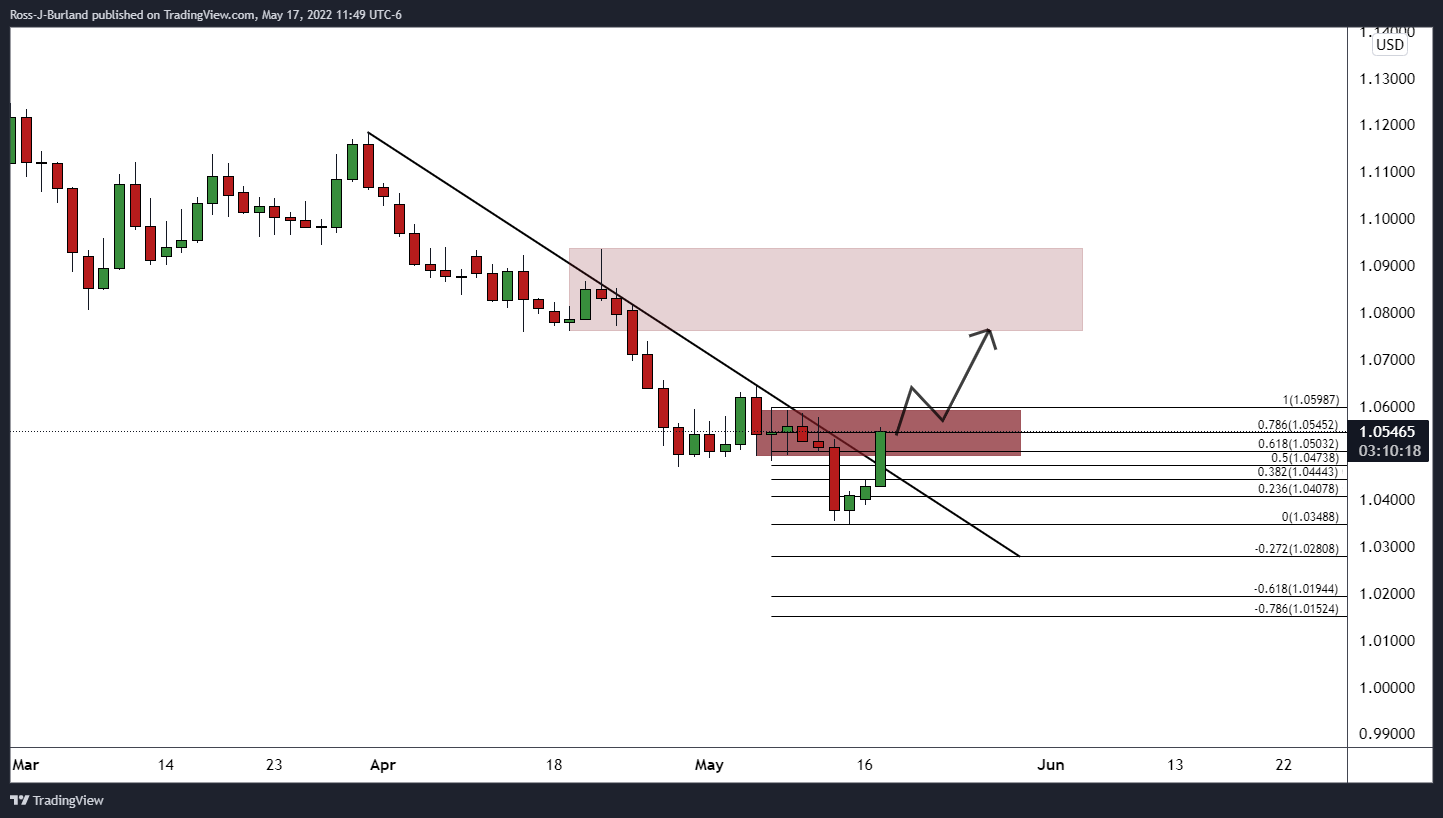